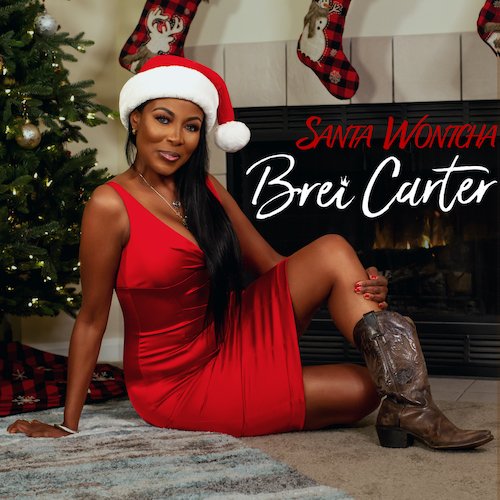 Plus, Brei launches all new web store at ShopBreiCarter.com with logoed apparel, accessories, and luxury themed candles inspired by her song catalog

NASHVILLE, Tenn. – Crossover country and southern pop recording artist Brei Carter just can’t wait to usher in the holiday season with her festive original song, “Santa Wontcha,” available today across all major digital music platforms or at breicarter.hearnow.com/santa-wontcha. Singing of “cocoa and candy canes flowing through my veins,” the vivacious personality of this up-and-coming country songstress shines through on this holiday jingle, much like the rest of her back catalog of songs do.

“Christmas has always been one of my favorite times of year, so I wanted to write a song that makes me so happy,” Brei said. “Santa Wontcha is a sing-a-long song where we’re asking for Santa to come a little sooner. You know, to spread Yuletide cheer to everyone!”

Brei also shared an accompanying live-shot video from the song’s recording session on her YouTube channel, which again accentuates her dynamic personality which she is crafting a reputation for. She is also scheduled to give a special acoustic performance of the song, featuring guest artist Sam Woods, on Tuesday, December 14 in the 11am CT hour on WSMV-TV’s ‘Today In Nashville.’

Brei launches new web store with limited time 20% off all orders
Brei is also excited to have recently launched a brand new web store at ShopBreiCarter.com which features custom logoed apparel like T-shirts, sweatshirts, and hats. Plus, tumblers, drink koozies and a selection of luxury soy-based candles with scents inspired by a few of her own song names like “Brand New Country,” “Back Porch Lovin’” and her current single which is currently making its way up the Music Row Chart, “Gave Him a Girl.”

Now through December 7 fans can get 20% off on all orders using promo code “Brei20” as an introductory offer to celebrate the launch of the new webstore.